The easiest way to start with the xPack C/C++ Managed Build extension is to create the classical Hello World project.

Projects can be created from scratch, but, to simplify things, the process can be automated by using a project template, and the xPack extension already includes a command to create a project from a template. To run it: 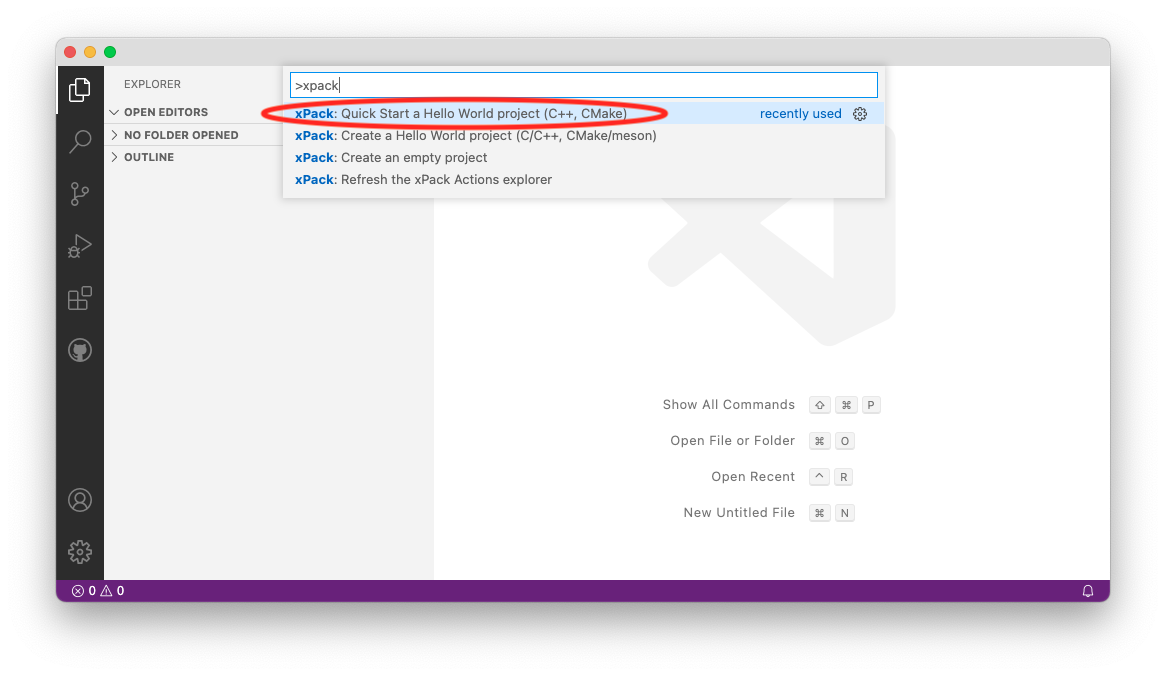 The project creation requires an empty folder. The xPack extension asks the user for the location of this folder.

In this example, a folder called tmp/hello in the user home folder is used, but any location is good as well: 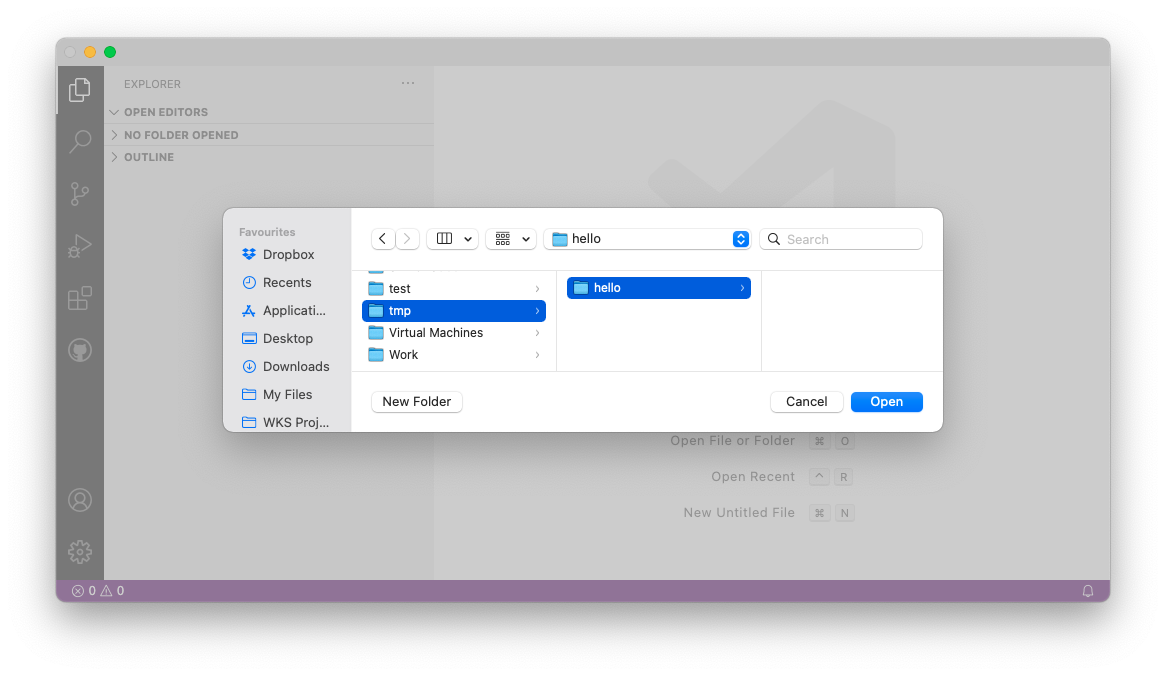 Once the folder is selected, the xPack extension invokes xpm init to create a new project based on the @xpack/hello-world-template which is a separate source xPack.

The command is executed in a separate shell, and the console output looks like this: 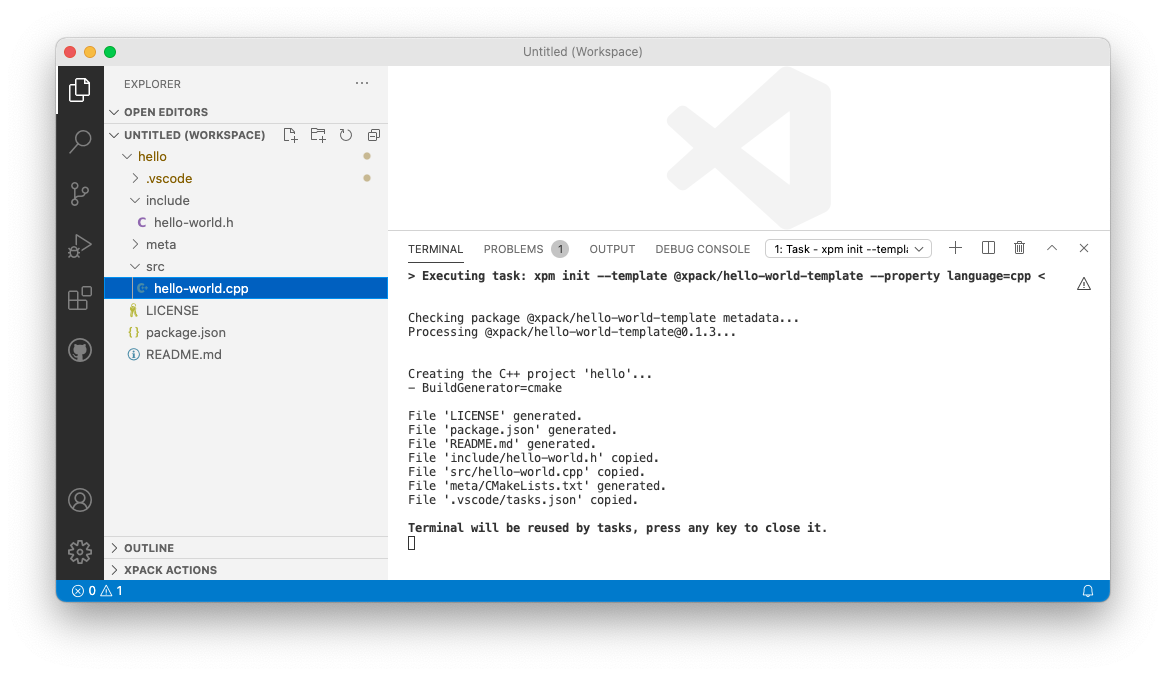 The result is a simple project, with:

The same result can be obtained by running the following commands in a terminal:

Once the project is created, the xPack Actions explorer should become visible in the bottom left part of the screen: 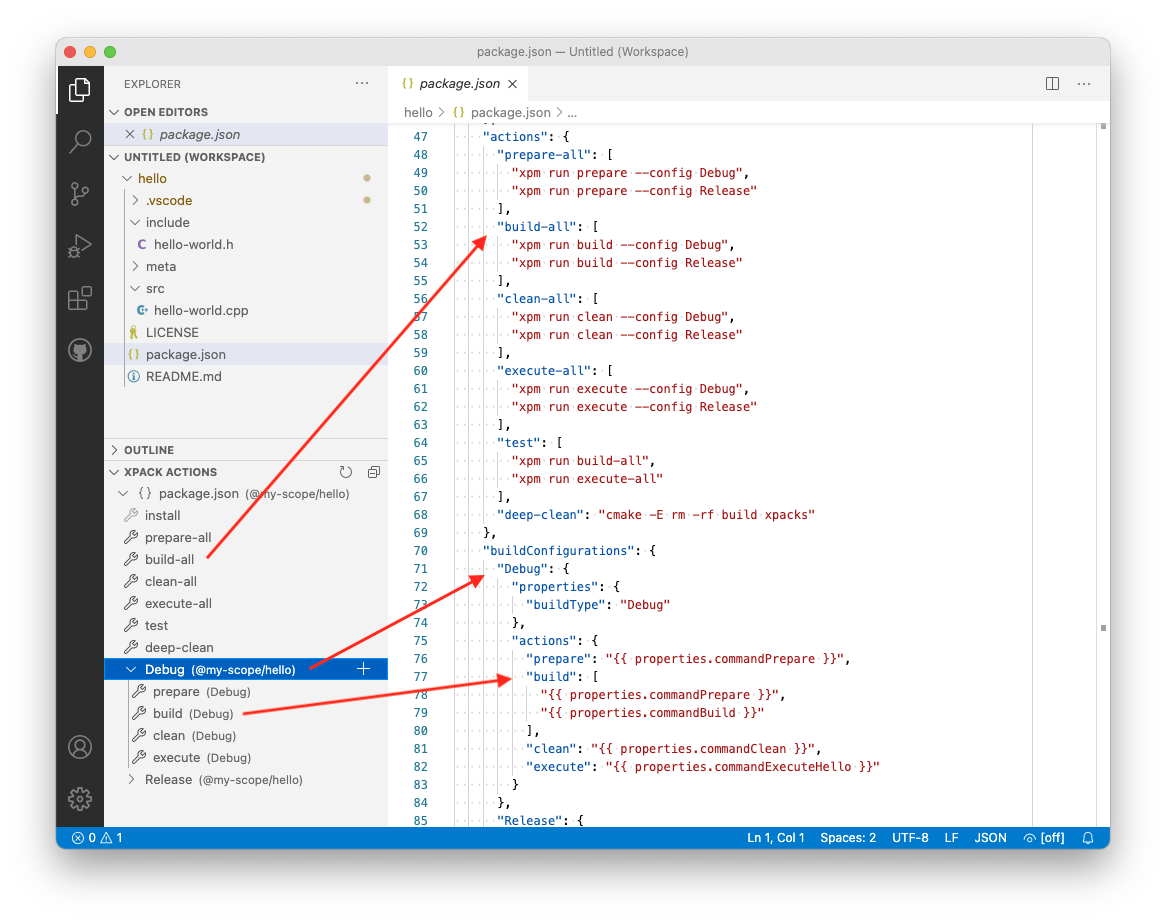 Tip: If this does not happen automatically, at first use it might be necessary to enable this explorer by running the command Explorer: Focus on xPack Actions View, or by Right Clicking on any of the explorers on the bottom left corner, and enabling xPack Actions.

The explorer also shows multiple actions, which are associated with custom sequences of commands (shown as tooltips). There are global actions, and actions specific to each build configuration. Actions can be executed by clicking the triangular icon (▷) at the right side of the explorer line (described by tooltip as Run Action).

As with most other graphical objects, the xPacks Actions explorer shows additional information as tooltips, visible after hovering with the mouse for a few moments over the tree items.

The xPack project provides cross-platform binary tools which can be automatically installed and used by xPack aware projects.

In this example, the generated project includes development dependencies to specific versions of CMake and ninja.

To satisfy these dependencies, click the Install button (described by the tooltip as Run Command) in the explorer: 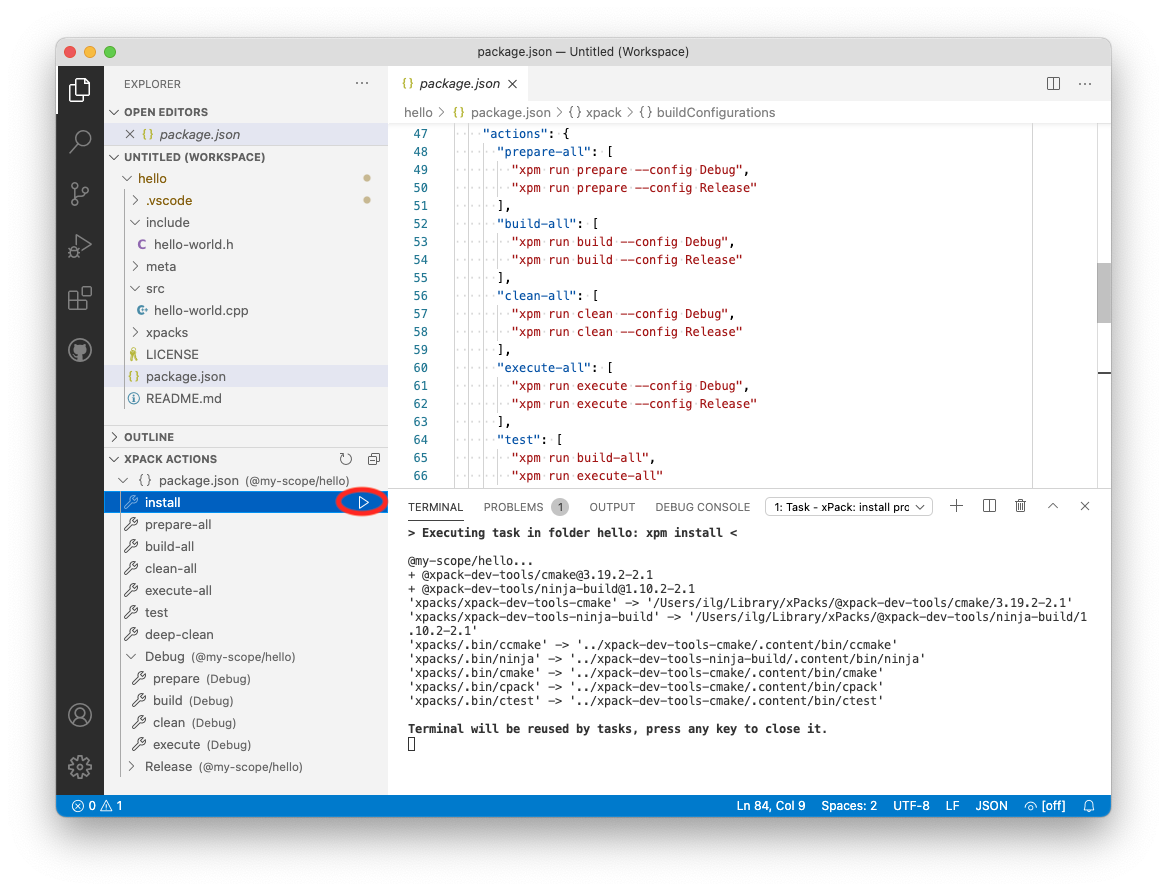 The same result can be obtained by running the following command in the project folder:

Note: The use of xPack binary tools is optional, for example GNU/Linux users may very well continue to build their projects in the traditional way, with tools installed via the system package manager; however, macOS and Windows users might prefer a convenient way to install additional binary tools.
Note: The binary xPacks are strictly versioned, and, for obtaining reproducible builds, it is recommended to lock a project to a specific set of tools, completely unrelated to the versions used by other projects and not depending on the (possibly changing) versions available in the system.

With the binary tools available, the build can be invoked by selecting the desired configuration in the explorer (Debug in this case), and clicking the triangular icon (▷) at the right side of the build line (described by tooltip as Run Action). 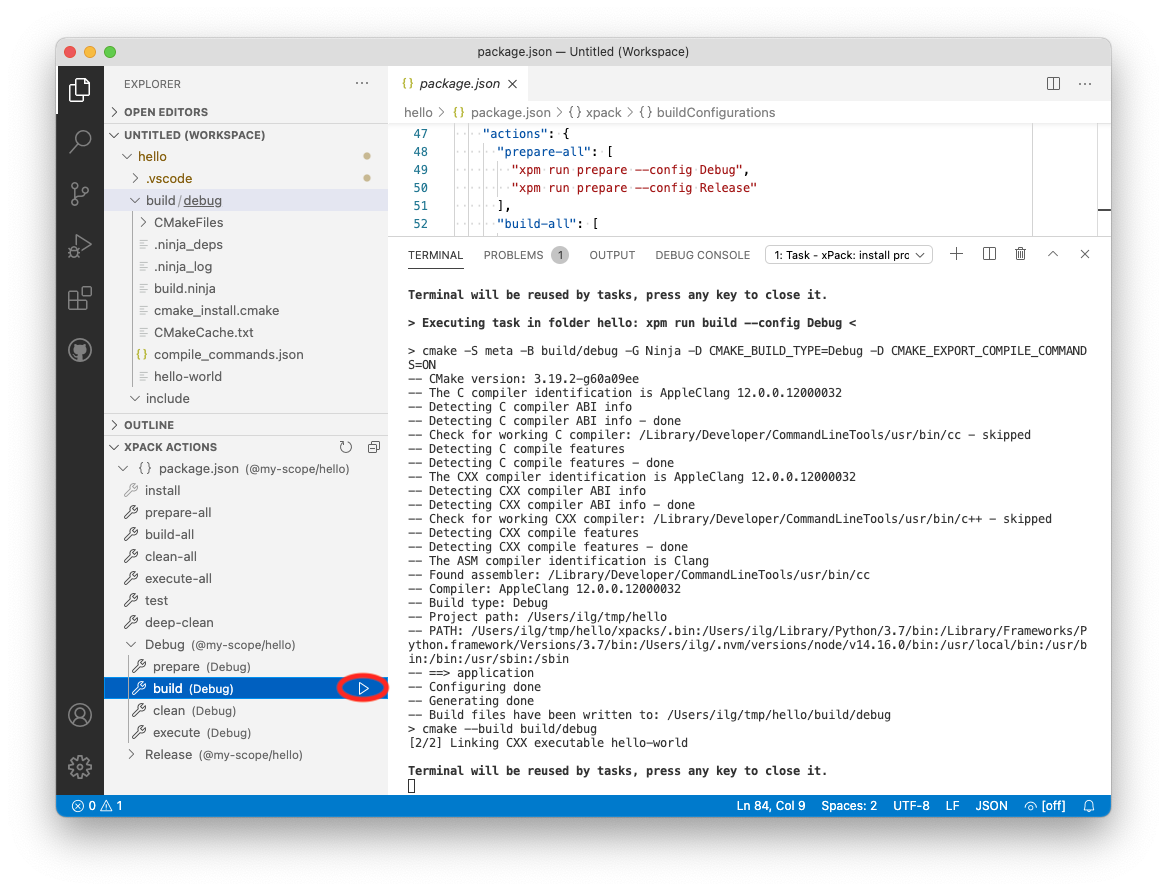 The result is a build/debug folder, where CMake performed the build.

The same result can be obtained by running the following command in the project folder:

The resulting binary file is a regular ELF, which can be started as usual in a terminal.

As a shortcut, the project includes an execute action, which invokes the hello-world executable: 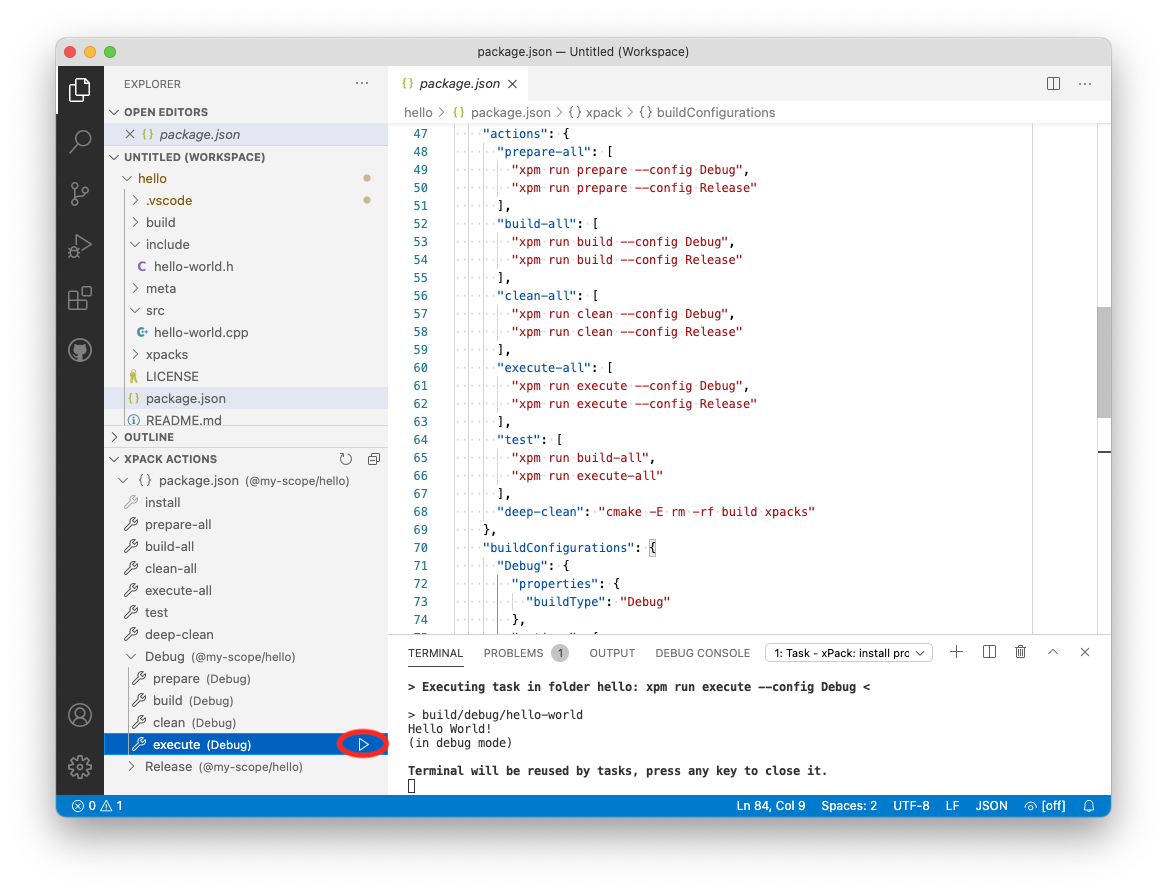 The VS Code C/C++ extension stores the IntelliSense configuration in ${workspaceFolder}/.vscode/c_cpp_properties.json files, located in each workspace folder.

For build system generators which create the compile_commands.json file (like CMake and meson), the xPack extension automatically adds the paths to these files in the c_cpp_properties.json file, and the VS Code C/C++ extension can automatically process them. 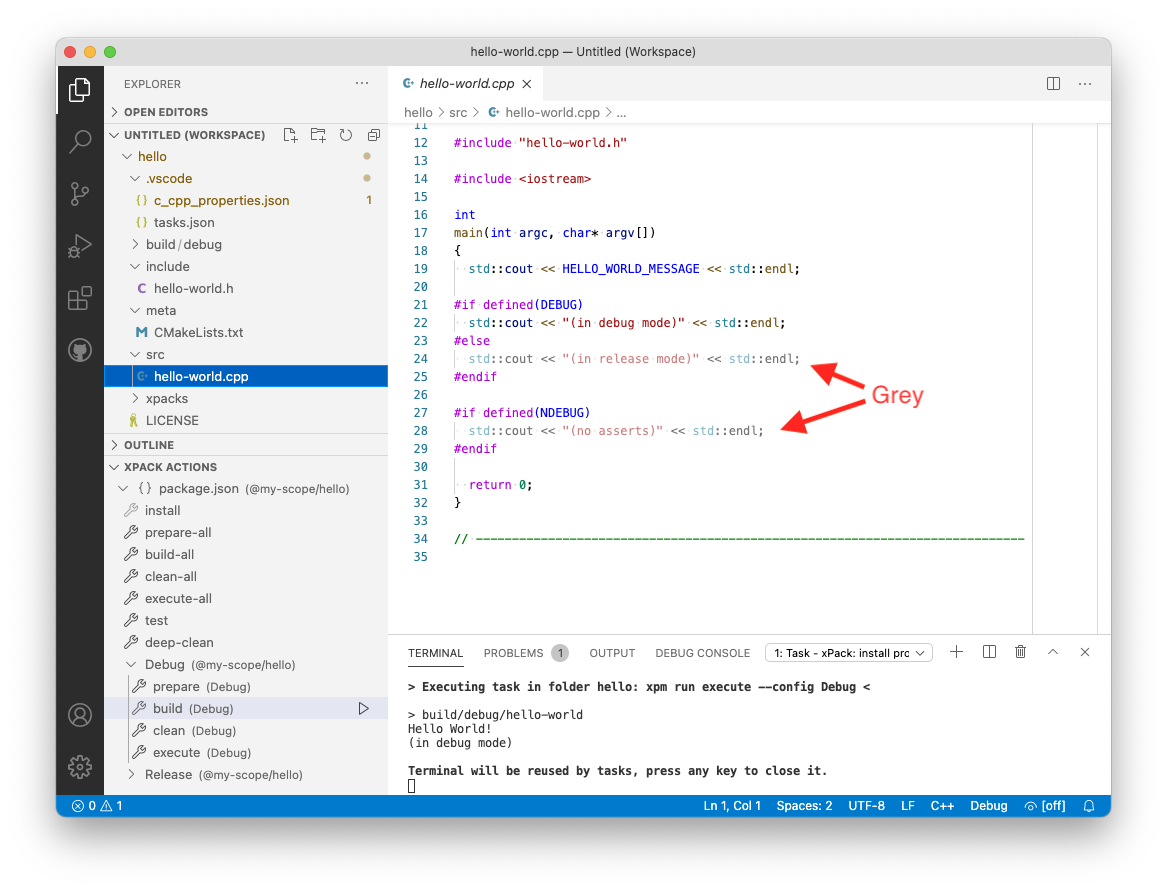 As it can be seen, the editor renders any dead code in gray (actually in a set of lighter colours), which is a good sign that the project was configured correctly.

For details on the indexer, please read the separate IntelliSense web page.

To test this, also build the release binaries (by clicking the build action in the Release section of the xPacks Actions explorer), then click the Debug entry shown on the bottom Status Bar, which should open a picker to select the desired configuration: 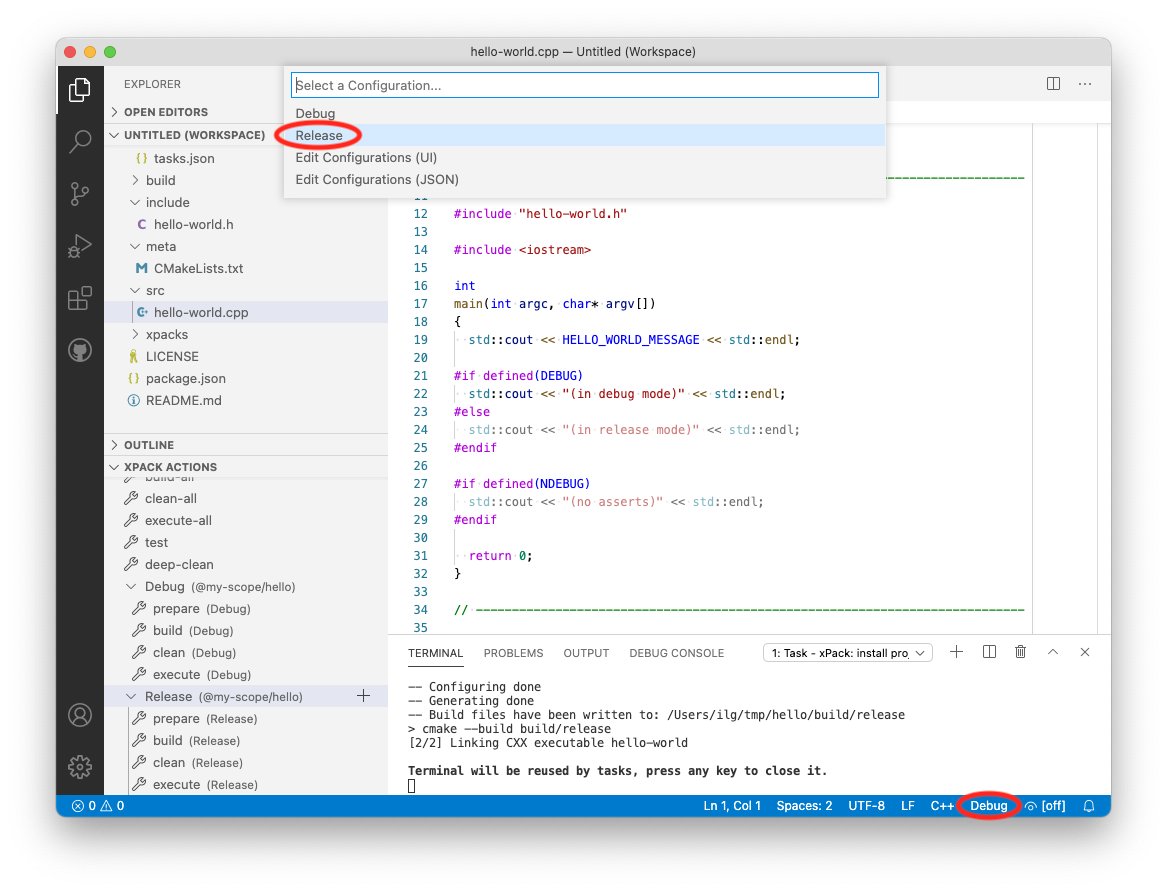 Tip: The C/C++ configuration selector is enabled only when editing C/C++ source files.

After selecting Release, the editor will automatically update the content, and show the debug dead code as grey: 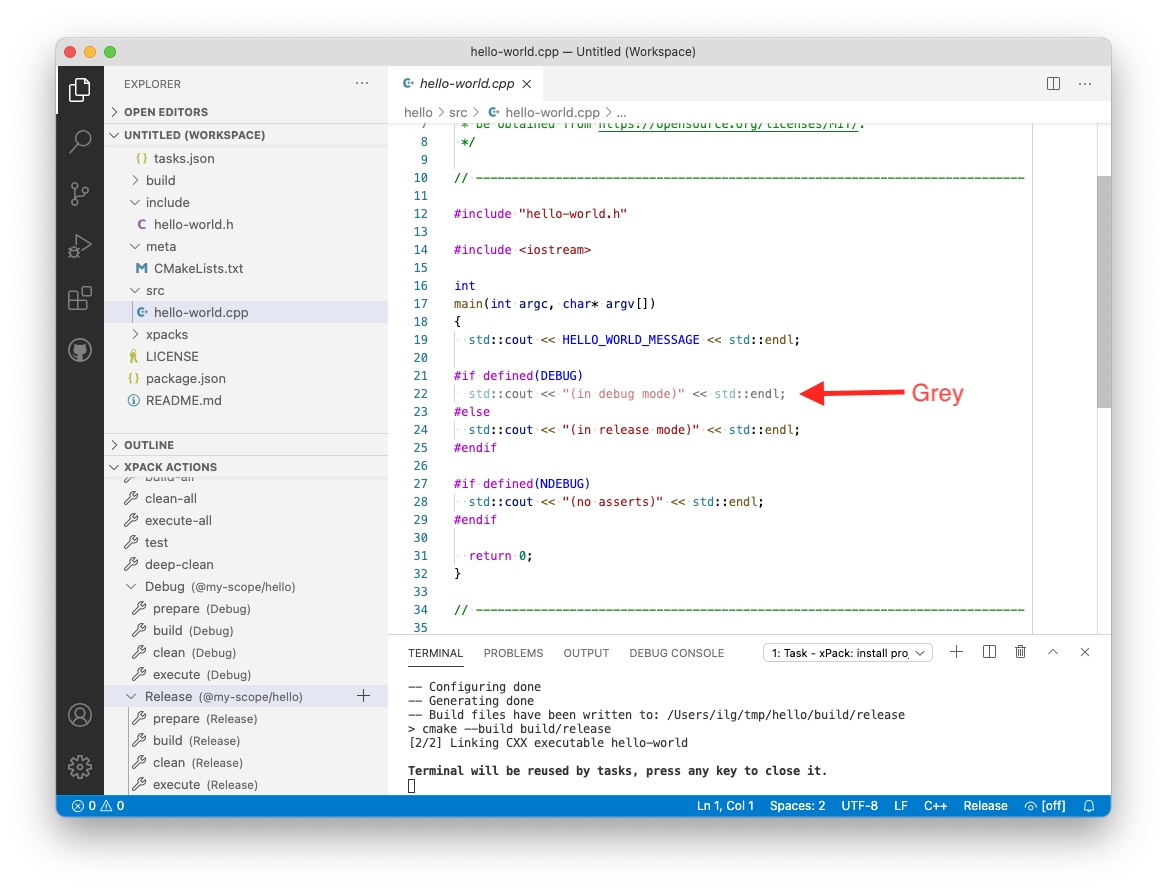 Note: When the compile_commands.json files do not exist (for example right after the project creation and before performing the first build), VS Code cannot provide IntelliSense services. Run the build action, or at least the prepare action, for all configurations, to create these files.

When closing the workspace, either by closing VS Code, or via the File menu, VS Code asks the user permission to save the workspace configuration as a file: 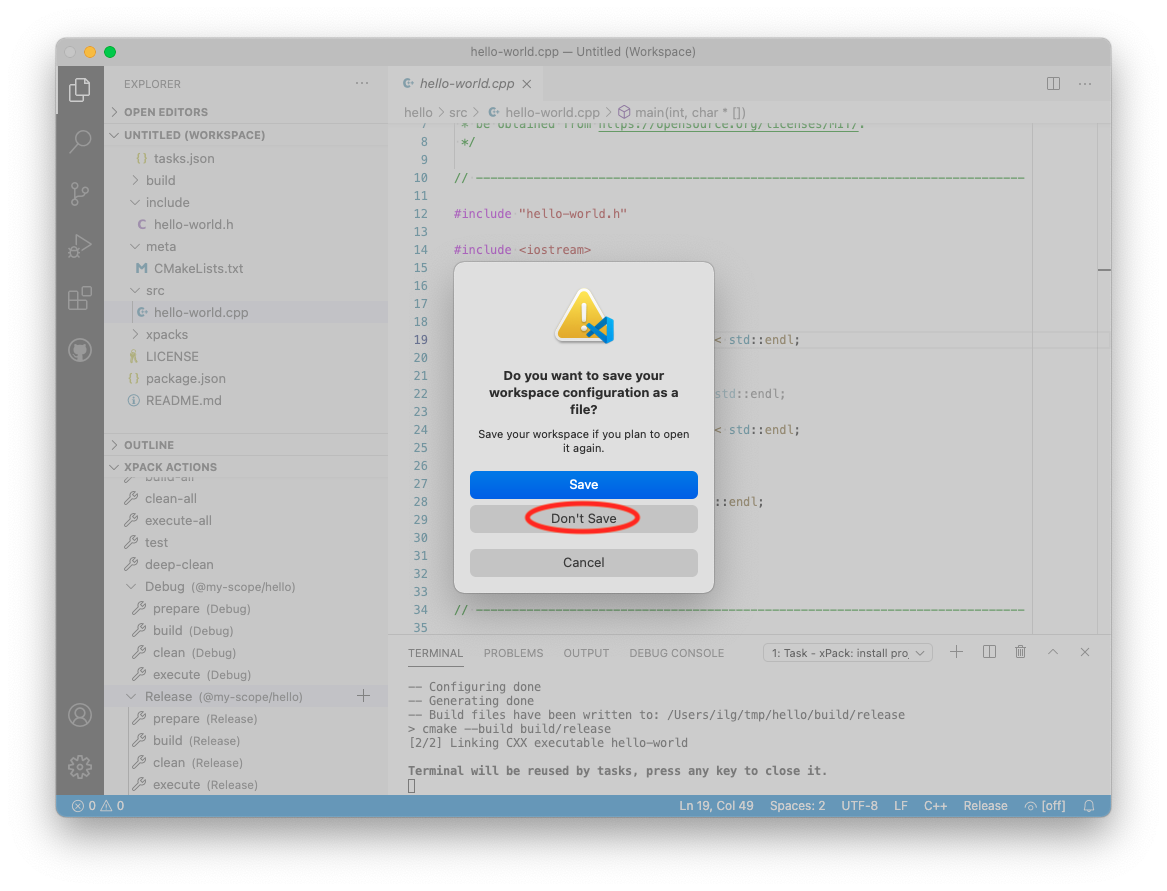 This is optional, and for independent projects, it is not of much help, so it can be skipped (click the Don’t Save button).

However, for complex projects which comprise multiple projects, it might be useful to group all folders as an workspace, and open all in the same VS Code instance.

The recommended way to start a new project is to create a simple Hello World project, which includes the two (Debug/Release) build configurations, each with the usual build/clean actions, and later extend the project with the actual application code.

However, for those who prefer to start from scratch, it is possible to create an empty project, without any build configurations and actions, and manually add them to any custom configuration. 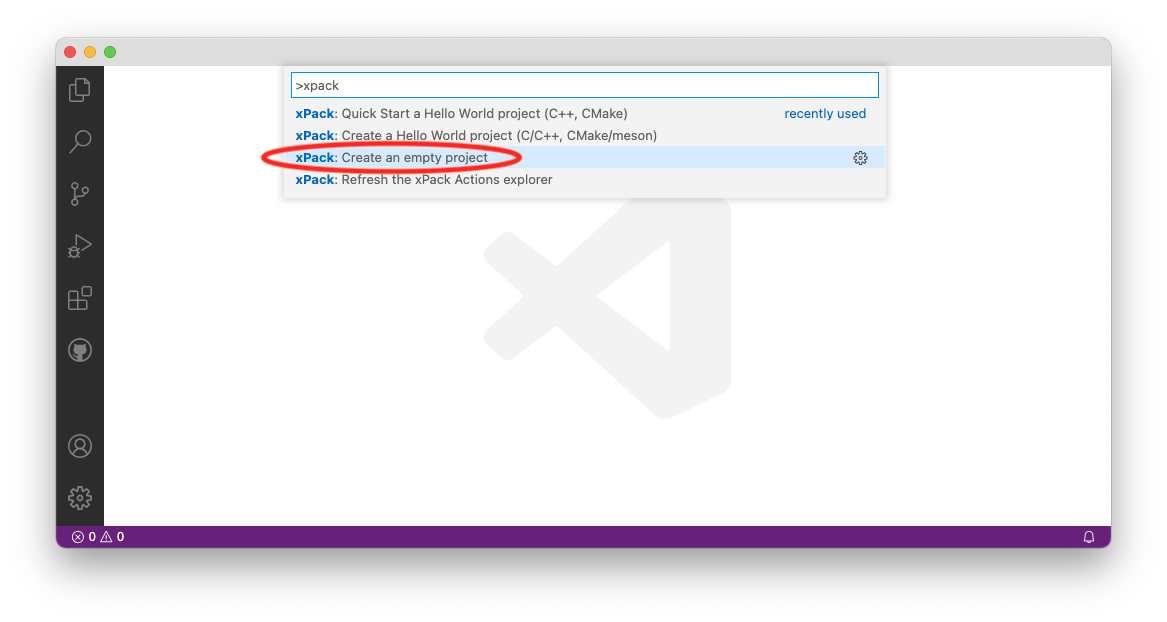 Create a C version of the Hello World

The project template is configurable, and can be invoked in interactive mode, which will ask the user for different choices, including choosing between C and C++ projects.

To do this from within the xPack extension, select the xPack: Create a Hello World project and check the console for the questions.